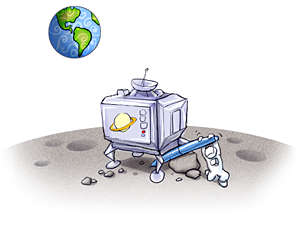 It's a story that for many weeks was not circulated outside the inner circles of the U.S. Space Program: the Fisher Space Pen helped the original Moon-landing astronauts, Neil Armstrong and Edwin (Buzz) Aldrin, get back to Earth. A spokesman for NASA recounted the story to Paul C. Fisher, whose company manufactured the pen.

When about to leave the moon, and the astronauts were climbing back into the Lunar Module, the life support backpack on one of the astronauts brushed against the plastic arming switch and broke it. The switch was to have activated the LM's engines for the module's rendezvous with the mother spacecraft. Aldrin informed Houston's Space Center by radio. A Scientist went to work on the problem immediately by breaking the plastic switch on a duplicate module and then studying the possibility of reaching a tiny metal strip inside the switch. The strip had to be flipped over to one side to activate the LM engine, but Ground Control knew the astronauts had dispensed with practically all tools in the interest of less weight. But the astronauts still had their Space Pen instruments, so they were advised to retract the point and use the hollow end of the pen to activate the inside switch. Then, Aldrin used his Space Pen to flick the switch's inner workings. He and Armstrong were lifted from the moon to the Apollo Space Ship for return to earth. The story came out after John McLeish, a NASA public relations official, was quarantined with Armstrong and Aldrin upon the Astronauts' return from their outer-space trip. McLeish told Fisher of the emergency on the moon, related to him by the astronauts. "If it hadn't been for the Fisher Space Pen®, the astronauts, Armstrong and Aldrin, might still be up there on the Moon."

The early astronauts used pencils for note taking because there were no Space Pen writing instruments and no other pens would work in space. With the astronauts in mind, Fisher developed what he called his "Space Pen®," a pen that would write under weightless conditions and in the vacuum of space.