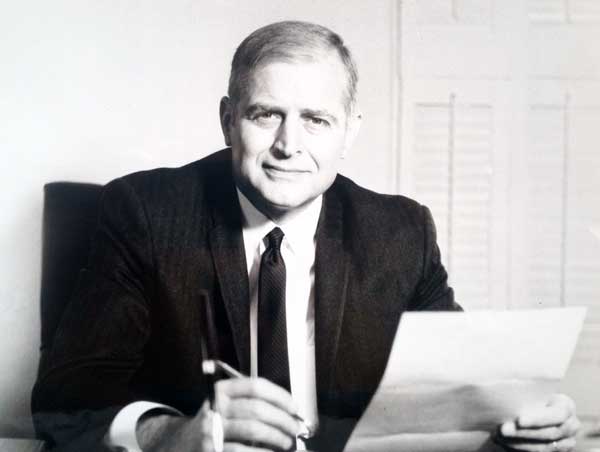 Paul C. Fisher, a visionary and inventor, specializing in the production of precision bearings for World War II Bomber planes, did not imagine that one day in the future he would revolutionize the writing capability of the ball point pen.

Paul's mission began in 1945, with the realization that the ball-bearing business would end along with the War. In his job search, he heard about a company seeking to produce a ball point pen. The pen company thus far had an unreliable pen; the only available refills allowed too much ink to flow, leaked, or dried out too soon. He became a partner in a screw machine job shop whose customers included a ballpoint pen manufacturer.  Fisher later started making writing instruments himself. He founded the Fisher Pen Company in 1948 as a division of Fisher Armour Manufacturing.

By 1950 Paul Fisher had not only solved the pen refill problems, he began his own production of ball point pens, further improving the performance of the refill and introducing the world to the iconic Chrome Bullet pen design manfactured from aluminum rod stock. Fisher envisioned a small pocket pen that looked like a bullet and 1948 he began to machine pens in the Bullet design named for its sleek rounded ends. It was an immediate success and arguably one of the most popular pens of the 20th and 21st century.  This well known pen continues to be available in many colours and finishes and remains one of Fisher's most popular pen models. It is in the Museum of Modern Art's permanent collection as a symbol of American industrial design.

In the 1950's there were dozens of ballpoint models, and nearly every one took a different cartridge. In 1953 Fisher invented the "Universal Refill" which could be used in most pens. It was a good seller, since stationery store owners could reduce their stock of assorted refills.

Paul was positively passionate about his pens!

A million dollars in research later, he invented a cartridge that would write in any position, thanks to a refill pressurized with nitrogen gas! Ink stained jackets and pants were gone for good, and a wonderful, smooth performing ball point pen was born. Paul had another Mission in mind for his pen - he introduced this unique pen cartridge to NASA!  The moon race was on and the astronauts involved in the Mercury and Gemini missions had been using pencils to take notes in outer-space since standard ball points did not work in zero gravity. After the fire on Apollo 1 all combustable objects were not permitted on board spacecraft. The Fisher cartridge did work in the weightlessness of outer-space and the astronauts, beginning with the October, 1968 Apollo 7 mission began using the Fisher AG-7 Astronaut Space Pen and cartridge developed in 1966.

For more than 50 years, Paul Fisher employed the process of trial and error experimentation guided by analysis of results in a constant effort to make his pens the most versatile, reliable, and durable in the world. Today, the company sells and distributes their unequaled writing instruments to people groups and agencies throughout the planet.